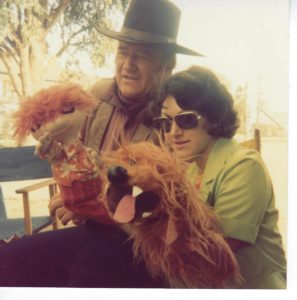 Coming from a long-standing tradition of puppetry, Jackie and John Lewis’, “Jeral Puppets,” Australia’s leading commercial puppet company, has been performing professionally since 1966.

With a cast of over 1080 puppet characters and a repertoire of 123 puppet plays ranging from “The Three Bears” to “Wizard of Oz” and “20 000 Leagues Under the Sea,” the Jeral Puppets have presented their colourful and exciting puppetry everywhere from the Drama Theatre of the Sydney Opera House, to film and television studios in Singapore and Malaysia.

Jackie, a trained specialist education teacher is both writer and one of Australia’s leading puppet manipulators. Over the last 45 years she has written extensively for many government departments, museums, television, videos, theatres and major department stores including David Jones and Grace Bros. John, an honours degree architectural graduate is a designer, producer, performer and puppet maker. Together they have done over over 28,000 live performances, 600 television shows, nearly 40 commercials, including the famous “Grosby Dog” shoe commercial with film legend, John Wayne.

Apart from performances at “Puppeteria”, Castle Cove, Jeral Puppets continue to do educational performances in museums, pre-schools and NSW schools where they were 2002 winners of the prestigious “Frater Award,” for 31 years as authorised performers in government schools. Their son, Nicholas Lewis has been performing their shows daily in preschools for the past 11 years. They also make “The Happy Health Harold” puppets for the Life Education Center used within Australia and overseas. So far they have made 309 Harold Giraffes.